Inside the Head of Zach Schulte, Co-Owner and VP of Operations

From initial consultation to crating and shipping your custom piece, Zach Schulte is there to watch over every step. He’s the co-owner and vice president of operations at CVCF, and no piece leaves our shop without his approval. He’s  at the center of this company and a key to its success, but what else is there to know besides woodworking? Recently, we sat down with Zach to find out more about him.

In this new series, we will be interviewing the different people at the company in order to get to know them on a more familiar level. Seeing as Zach is slated to take over for the owner, Shel Myeroff, who better to start with? Below is a transcribed version of our interview with him.

Question: What’s your favorite project you’ve worked on at CVCF?

Answer: Boy, that’s a tough one. I think I always have a new favorite project. I really like that Jim Nash cookie table we just did that was with the translucent black epoxy. Just because it was so different than anything we’ve done before and it turned out really, really cool.

I also really liked the Life Hopes Lab conference table. Again, just because it was different and it had a lot of bells and whistles, and a lot of moving parts that took a lot of thinking to make it all come together like that was really satisfying. I’d put those two up towards the top. 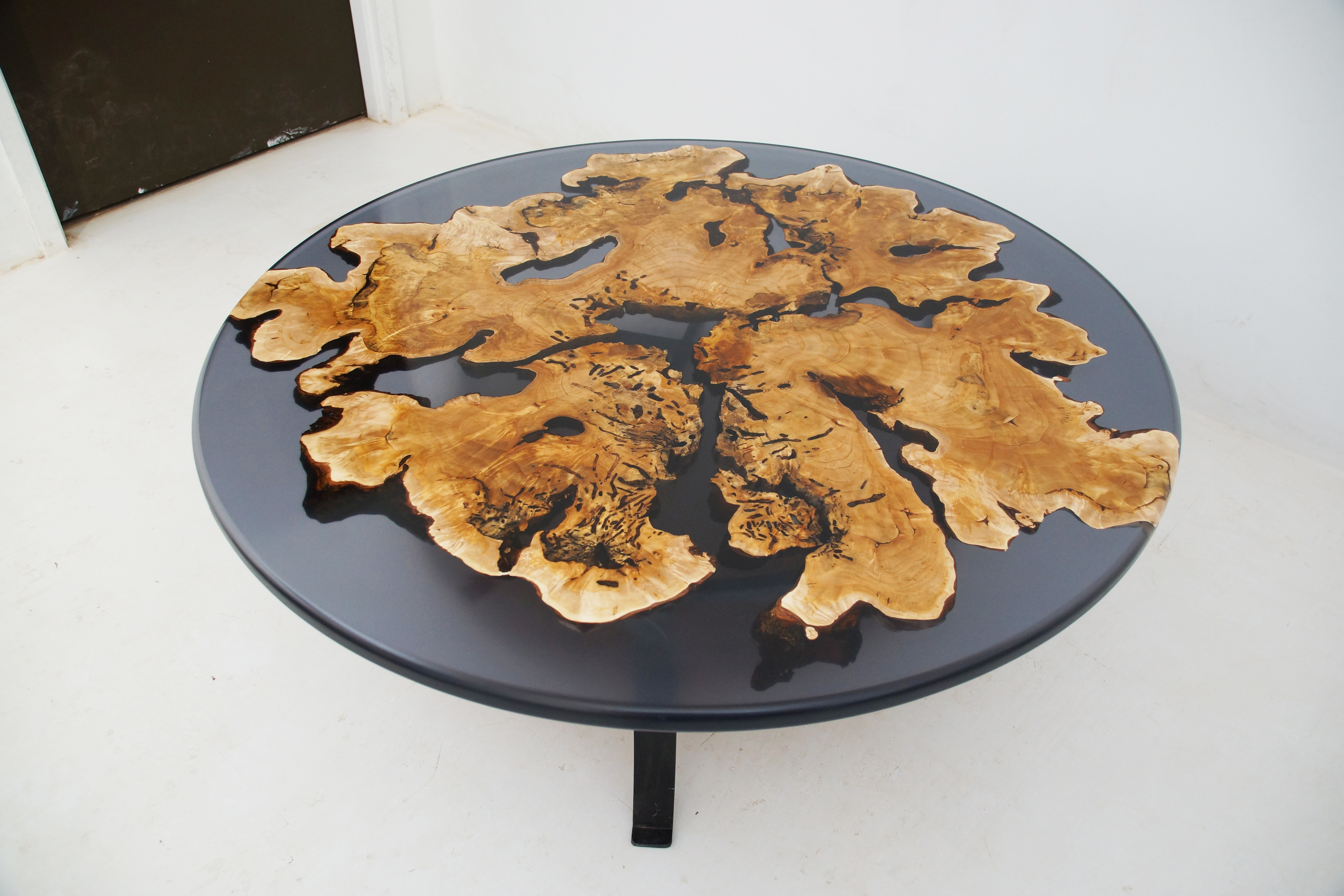 I would say [my] favorite thing about being in the shop is definitely just seeing the projects come to life. And I love teaching, so I love to work with the guys in the shop and give my little tidbit here and there. Then, in the office, I do enjoy when I get to have some great conversations with some nice customers. That’s also really satisfying to kind of put it all together with them.

Q: If you could switch places with someone at the company, who would it be and why? 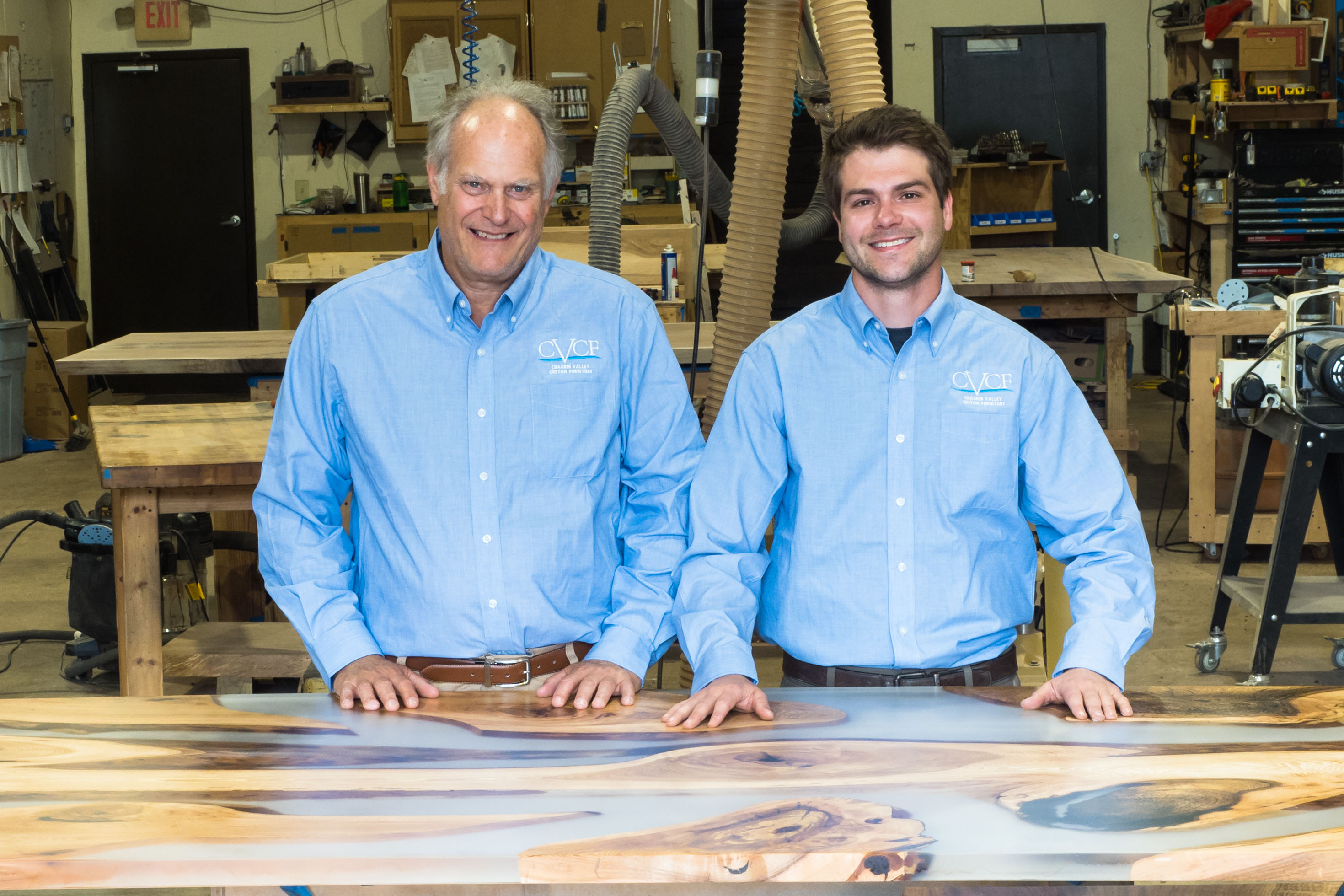 A: Can I say when people don’t listen? Obviously other than mistakes or when things aren’t going right, that’s pretty self-explanatory; I would say, for people that don’t work here getting in the way during work hours is probably a pet peeve that I share with a lot of people. To be as busy of a shop as we are now and have my dad come in here and take up a station? Sometimes that’s a peeve of mine. So, I would say people getting in the way that shouldn’t be there.

Q: What epoxy color do you wish clients selected more?

A: I’d say golden indigo’s up there. I don’t know if I have one, specific favorite. That would probably be the one if I had to pick. I would just say in general, more of the non-traditional blues. Like, I just got off the phone a customer, showed them all the different blues, and they picked the same one that everybody picks. It’s the most vibrant blue, so I don’t blame people, you know? It’s got the most contrast.

Q: What’s a shop memory that makes you laugh?

A: The first one that’s coming to my mind? When we did the deep clean at the end of the year, Eric and I brought in leaf-blower backpacks. After everybody cleaned the shop really deep, Eric and I fired up these leaf blowers and put on our respirator suits. W took leaf blowers to the entire shop. It was just a full-blown dust storm for three hours in here.

Q: If the shop had a theme song what would it be?

Q: What’s something around the shop you wish you never had to do again?

A: Maybe having to break bad news to customers? That’s never fun. Other than that, I would maybe say cleaning the toilets at the shop. We do delegate that one a little bit now though.

Q: What’s something you’d and to build if time and money were no object?

A: I would probably say some type of really intricate CNC design of an artistic pattern. Almost like a geometrical type pattern with different color resins and different types of epoxy. Something that’s almost like an optical illusion when you look at it. I think it’d be fun to take on a really intricate cabinet that features different types of epoxy and wood with all the bells and whistles would be something fun to do.  But, off the top of my head, I’d say just a really cool CNC design. 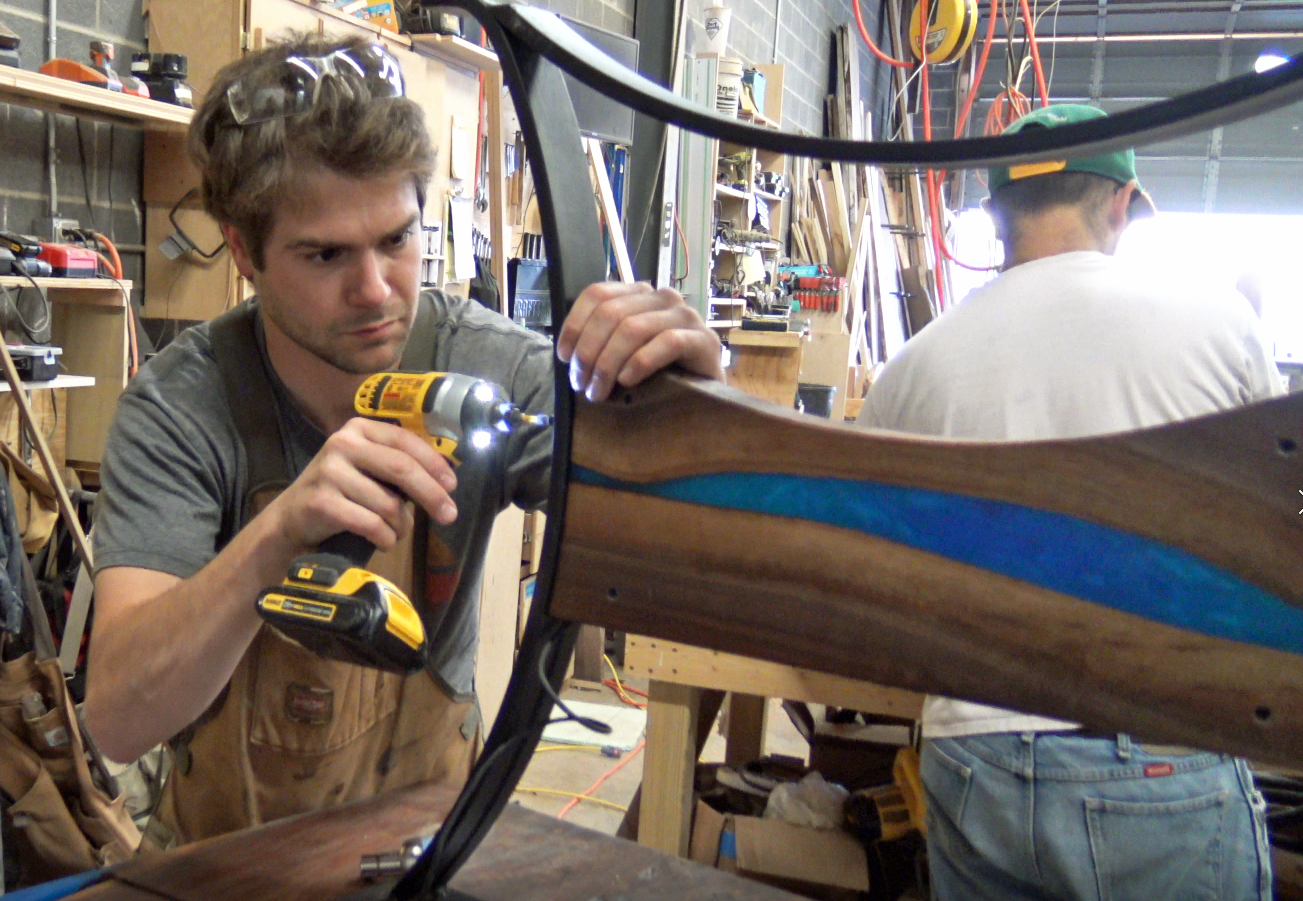 Q: What’s a piece of advice that’s stuck with you?

A: A piece of advice? You know, Shel’s been my mentor in a lot of ways, so I’m just thinking of all the different things he’s said to me over the years. I would say, the never-give-up type attitude, you know? Positivity. Sometimes I catch myself  kind of maybe being a little negative or pessimistic, but if you look at the big picture everything will work out, everything will be fine. So, [I] just try to remember to stay positive and to put that energy out for all the different people working here because I can be the person they look towards. So if I’m down then everybody’s down, so it’s something I try to remember to do.