History Of A Rustic & Modern Custom Furniture Company In The U.S.

It Was The Start Of Something Big.

Follow the trajectory of CVCF in this video created from Andy Levine’s podcast “Second Act Stories”.

In the late 1970’s, Sheldon Myeroff founded Direct Recruiters, Inc., a highly successful executive search company in Cleveland, Ohio. However, at the end of a long workday, his attention turned to his real passion – furniture making. At first, his biggest fans and clients were his family, who asked for special wood projects on a regular basis. Sheldon was more than happy to oblige, of course. Then friends and neighbors starting asking for his beautiful furniture. Again, he was happy to oblige. To accommodate the increased workload and produce higher quality wood furniture products, Sheldon built a full woodworking shop in the basement of his Chagrin Falls, Ohio home. He also sought out formal training in furniture making and worked alongside a highly regarded woodworking mentor.

In 2013, he decided that, in five years, when he retired from his recruiting business, he would start focusing his time and energy on making furniture (outside of visiting his grandkids, of course). As his popularity grew, he recruited skilled woodworkers, including now VP of operations Zach Schulte, to help with his projects. He dubbed his new endeavor, “Chagrin Valley Custom Furniture”, after the beautiful wooded area where he lives. 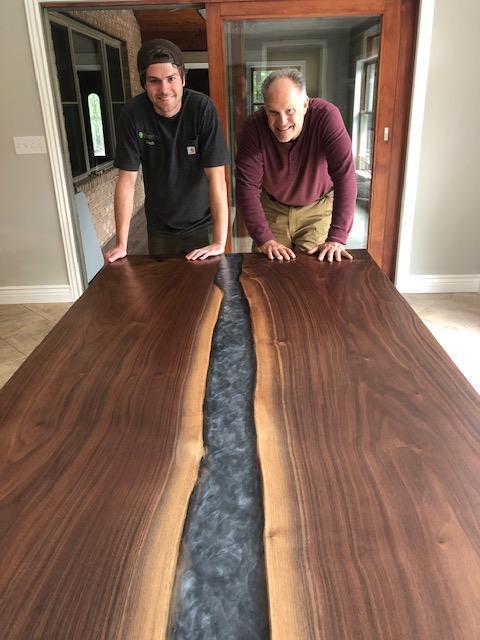 Chagrin Valley has designed and built over 400 river tables since 2018.

After Zach spent time on and off contributing to the initial growth of the company by contributing to its establishment of "rustic and live edge" specializations, in 2018, Zach became a full partner of CVCF in an official capacity. Zach then became a pioneer in developing CVCF's epoxy resin "river" table offerings to customers.

When he retired in 2018, Sheldon didn’t slow down. Instead, he put his foot on the pedal and his business took off. He wasn’t just getting custom furniture requests from his friends, family, and neighbors, he was getting inquiries from as far away as Barrow, Alaska!

Chagrin Valley has grown to include a state-of-the-art woodworking shop with a showroom and design studio in the front of the building, so that interested customers could view the woodworking process firsthand and even take part in the process.

Today, Chagrin Valley has a team of about 10 fulltime designers and woodworkers helping homeowners and businesses across the United States get just the furniture they want…just the way they want it!

Send us your furniture design ideas.

We help you take your design to reality. From the wood type, to the epoxy color or special services you choose, we can help build it.

Send Your Design Idea Design Your Own

Get a quote from your furniture ideas.

Simply send us your project details and we will get back with an estimate within a few business days.

How to place a furniture order.

How to Place An Order